Medford, LI—Thursday, January 31: Legislator Rob Calarco recently visited the Patchogue Medford FIRST Robotics Team 329 where the team was in the process of tackling, what one of their team advisors, Dean of Students Mr. Kevin Ray, called the most difficult challenge he has seen in his 13 years of supervising the club.

This year’s challenge is called “Ultimate Ascent,” and tasks teams with building a robot that, in addition to shooting discs into slots stacked at varying heights on either end of a 27’ x 54’ field climb, must successfully climb up a hollow metallic pyramid. The more discs the robots successfully attain, and the longer and higher they can stand on the pyramid, the more points they score. The challenge was announced January 5th and the students have been spending endless hours since then planning and brainstorming on their robot since then.

There are more than four dozen FIRST Robotics Team 329 members, but Legislator Calarco spent the bulk of his tour with the students leading the intensive planning efforts behind this year’s robot. Junior Ricky Wecera explained that this is the first year the team is building the plans before building the robot – a major strategy change so difficult to execute only 100 out of the 2,700 competing teams are attempting.

“Ultimate Ascent” has presented new challenges to the Pat-Med Robotics squad and, as they explained to Legislator Calarco, they have responded with new approaches. For the first time ever, juniors Tim Oliveira, Justin Ferrari and Ricky Wecera are using a sophisticated computer program that allows them to test potential mechanical parts of the robot in the actual dimensions and materials before assembly. For example, if they want to see how a specific type of arm will operate, they can use the program to install it virtually instead of spending hours in the workshop.

Legislator Calarco said, “I was incredibly impressed by what the students are doing. This is exactly why it is so important to support STEM programs. If we can get kids interested in these types of activities now, they may choose to study STEM subjects in college and eventually pursue careers in engineering and science. I am excited for my next visit to see the completed robot; I cannot wait to see what the team will have accomplished.

As part of his ongoing efforts to support science, technology, engineering, and mathematics (STEM) youth programs, Legislator Calarco is returning to the FIRST Robotics Team 329 on February 15th to see the finished robot, and will be accompanying the team to their competition at Hofstra University on April 5th. 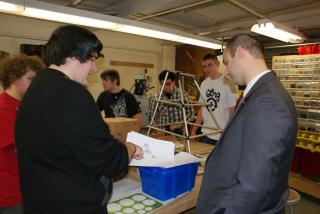